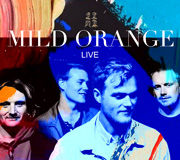 Building on their first album 'Foreplay', which attracted the band tens of millions of listens around the world, Mild Orange have returned with the 'quintessential Summer album' (Riot Magazine UK) and take their uplifting and powerful live show to another level.