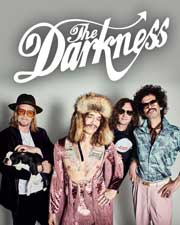 Brimming with their trademark blazing guitar riffs and solos, soaring falsetto and immeasurable rock ‘n’ roll extravagance, The Darkness will be operating at their loosest and most extroverted frequency.

Fans will be treated to new songs from the band’s new album Motorheart, along with slaying their award-winning, platinum-selling hit singles including ‘I Believe in a Thing Called Love’ and ‘Love Is Only A Feeling’- a true spectacle to behold.